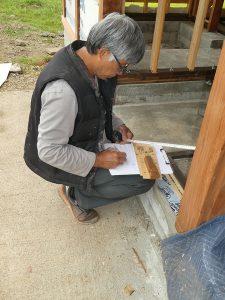 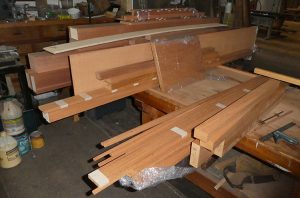 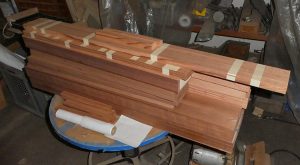 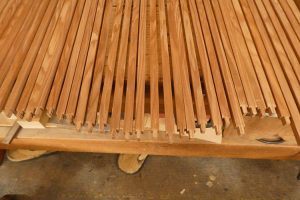 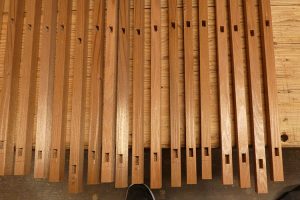 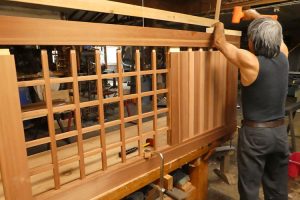 Hiroshi Sakaguchi is in process of constructing a building which will include a furoba (traditional Japanese bathing room with a Japanese wooden soaking tub), a small dressing room and half bathroom, a sauna, and a 6-mat tatami room to be used as a guest room or tea room. The building, 16’ by 26’, is being fabricated using traditional Japanese wooden post and beam construction. The basic floor plan was designed by the owners, then modified by Sakaguchi-san to fit the requirements of Japanese construction. Very high quality clear, tight vertical grain redwood and doug fir were procured by the owners– redwood for the main posts and doug fir for the beams. Sakaguchi-san shaped and hand-planed the wooden components and hand-cut the joinery in his workshop from late summer 2017 to early winter 2018.

In late March 2018, the components were transported to the building site on the coast in Northern California. In late April (waiting for good weather), Sakaguchi-san drove to the site to assemble the building. The structure’s  foundation is a concrete slab, and his first step was to layout the floor plan on the slab’s surface. He then secured bolts in the slab and structural framing was assembled.  He was aided in the assembly by the owners, their son and daughter, and friends.  The heavy structural beams were lifted up with an electric hoist.  Temporary scaffolding was built to enable this process.

After assembling wall post and beam structure, the scaffolding was removed and new scaffolding put up for installing the roof structure.  Roof structural components were then put in place.

After assembling roof structure, redwood ceiling boards were attached.  The building will have an open ceiling exposing structural framing.

Next roof insulation was added to be followed by exterior framing to support   cedar shingles.