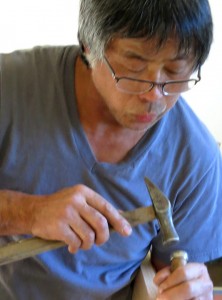 Hiroshi Sakaguchi is a traditionally trained carpenter or “daiku” from Japan. Sakaguchi-san’s understanding of wood comes not just from over forty-five years of experience, but from a family inheritance of woodworking that goes back generations. In Japan, traditional carpentry is a high art that takes very long and rigorous training.  From the age of 15, Hiroshi Sakaguchi began an apprenticeship in the ancient and very complex art of Japanese joinery, a carpentry system that connects wood by intricate joints rather than screws or nails.  Traditionally in Japan, carpenters were both the architect and builder having to master  traditional designs passed down through the centuries as well as woodworking skills. With an extensive knowledge of Japanese architectural design and experience in the construction of traditional houses and tea houses in Japan, Sakaguchi-san brought his skills to the United States and established a woodworking business, Ki Arts, in Northern California. Since there are not so many artisans in the United States to make specialized architectural components such as shoji and fusuma doors as found in Japan, he has diversified his skills. He even uses his joinery techniques to make custom-style Japanese furniture like low tea tables and tansu for the Japanese rooms he has constructed and wooden soaking tubs for Japanese-style bathing rooms. The work of Japanese master carpenter, Hiroshi Sakaguchi, can be seen in Japan, the United States, Canada, and Europe.  His Japanese designer/builder skills have been featured in books, magazines, on TV, and in film. 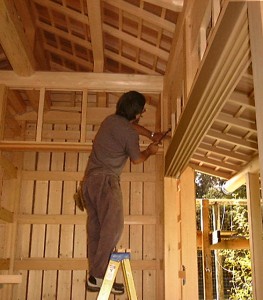